Bozo criminal for today comes from Oklahoma City, Oklahoma, where bozo John Lane targeted a smoke shop for a smash and grab robbery. He had a rather unique plan for smashing in, also. He was going to crash through by backing his car through the storefront. So, he positioned the Jeep, threw in into reverse and…Crash! He broke through the windows and backing into…the shoe repair shop next door. Right, he hit the wrong business. And to add insult to injury, he also set off an alarm which brought the police before he was even able to get out of his car. Busted! Charged with second-degree burglary and 2 counts of malicious injury to property.
Thanks to Bozo News Hawk Howard Rost for sending in today’s report from Buffalo, New York. Our bozo was enjoying a reefer while taking a little drive around town. He was pulled over for speeding and the cop could smell marijuana inside the car. Strike one. He then asked to see our bozo’s drivers license and he handed over a learner’s permit, only valid if someone else was riding with him. He was alone. Strike two. When asked to step out of the car, it was obvious he was trying to hide something in his pocket. When asked what it was, he replied that it was a 9mm pistol. And of course he didn’t have a permit for it. Strike three. He’s been charged with criminal possession of a weapon in the second degree, unlawful possession of marijuana and seven additional traffic violations.

Bozo criminal for today comes from the International File in Adelaide, Australia, where our bozo decided to have a little fun with his hot Holden Commodore. He was having a great time, cutting donuts and leaving excessive amounts of smoke inside a parking garage. Harmless fun, right? Well….not if the parking garage is directly above the local police station. Cops were waiting for him when he exited the building. Busted! Charged with drunken driving and misuse of a motor vehicle.
Bozo criminal for today comes from San Diego, California where our unidentified bozo decided to steal a forklift and take it for a little spin down Sports Arena Boulevard. Someone called the cops and not one, not two, not three, not four, but five cruisers were dispatched to corral the rogue piece of construction equipment. A super slow chase ensues, with our bozo running a red light before turning into a parking lot. Now we have a big standoff between five cars of police officers and one woman on a forklift. The standoff could still be going on if a bystander who had seen enough hadn’t taken matters into his own hands. He simply walked up to the forklift and removed the keys. Standoff over. Our bozo surrendered without a fight and was placed under arrest.
Bozo criminal for today comes from Ventura County, California, where the cops received a report of a drone buzzing around the neighborhood. Cops spotted the colorful red, green and silver drone and noticed something strange about it. There was a baggie containing a powdery substance attached to it. Oops. Our bozo was taken into custody, charged with suspicion of two counts of possessing a controlled substance for sale and one count of controlled substance possession. 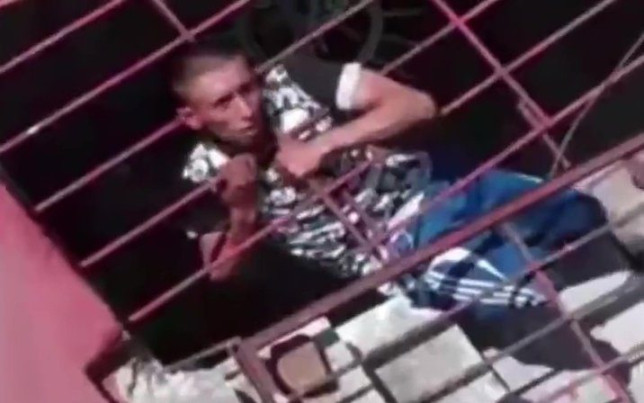 Thanks to Bozo News Hawk Glen Snow for sending in this one from the International File in Morelia, Mexico. Our would-be bozo burglar was prowling around when, for reasons known only to the Bozo Mind, he stuck his head between the building’s protective burglar bars. His head went in, but wouldn’t come out and he found himself stuck like a rat in a trap. Residents nearby noticed his plight and reported the situation to the cops at 4:40 pm. He remained stuck until 7 pm when the police finally arrived. After cutting him free with a pair of bolt cutters, he was led away in handcuffs.
Bozo criminal for today comes from Nashville, Tennessee, where the cops responded to a report of a car sitting in the middle of the intersection with the driver inside. Perhaps the man had suffered a medical emergency? Nope. Maybe the car had simply died? Nah. How about he was passed out, dead drunk? Yep. When the cops woke up sleeping beauty and asked him if he knew where he was, he replied, “In my bed.” Not exactly. Busted! Charged with DUI and driving with a suspended license.
Bozo criminal for today comes from Joliet, Illinois, where bozo Jefferson Lane spotted a car that was left running and unoccupied at a convenience store. He hopped in and drove away but quickly realized he wasn’t familiar with the area. When he came upon an officer working an accident, he stopped and asked the cop for directions. Guess the dimwit didn’t realize the car had already been reported as stolen. He was placed under arrest without incident.
This is the first time we’ve heard from our bozo friends in the Taliban in a while, and it’s good to see not much has changed. From the International File in Qultaq, Afghanistan comes a report that Talaban leaders had called a meeting to conduct a bomb making class. They had even brought in six “experts” to help show the guys just how to do it. Bad idea. One of the devices they were building malfunctioned and blew up the mosque, along with at least 30 would-be terrorists and the six “experts.”
Bozo criminal for today comes from Oklahoma City, Oklahoma, where bozo Sharon Brown broke into a residence by prying off a window screen and climbing in. She rummaged around but left without taking anything. But she did leave something behind…an empty bag of Cheetos on the kitchen floor. When the cops responded to a report of a suspicious person nearby, they found Cheeto residue on her teeth. Uh-oh. After being confronted with the evidence, she confessed to the break-in.
Thanks to Bozo News Hawk Josh Widdowson for sending in this violation of Bozo Rule Number 8948492: Always clear your search history. It seems bozo David Carroll of West Newton, Pennsylvania, had what he thought was a foolproof scam. He called the cops and reported his vehicle as stolen. Five days later, the cops found his SUV in a wooded area, torched and nearly unrecognizable, but they were able to trace the still intact VIN number back to our bozo. End of story, right? Nope. As part of the investigation, a search warrant was issued for his phone. And right at the top of his Google search history…”How to set your car on fire and make it look like an accident.” Oops. Busted! Charged with arson with intent to collect auto insurance, insurance fraud, filing a false report and risking a catastrophe.
Search the Case Files
Contact Dave

Email Dave with your scoop:
Send An Email